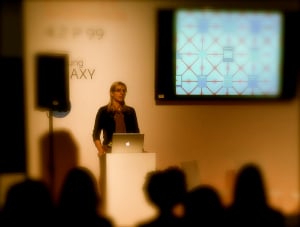 Even in age of virtual meetings, of global expansionandBRICs and MINTs and CIVETS, the Frankfurt Bookfair thrives - an essential occasion for the publishing industry to talk turkey (and eat schnitzel)1. Last year, the fledgling Kudos platform and team found new fans and friends at Frankfurt. This year, we took the plunge and our first stand2. It was unpretentious (by which I mean it was the smallest stand I've ever seen) but actually more than served our purposes: well located to pick up footfall, well positioned among similarly innovative services, well serviced with our very own electricity and ethernet cable (much envied by those struggling with the wifi on their big fancy stands), and well coordinated with the Kudos colour scheme! 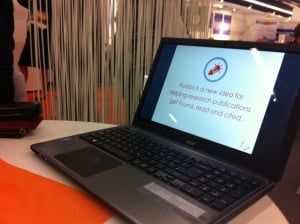 The stand, and our wider presence, was a great success, with Kudos "tulip fever" sweeping Frankfurt! Melinda gave a very well attended talk at the "digital hotspot" theatre (top picture) which resulted in lots of questions and interest from a great cross-section of publishers and librarians. Melinda also gave a press conference (in the style of silent disco, with journalists in headphones and Melinda talking quietly into a wireless mic!) while David gave a similar flash talk to a delegation of Finnish publishers and librarians. Only at Frankfurt! Perhaps most excitingly, we signed some major new deals with both publisher partners and data suppliers. We'll be making a substantial announcement on this blog very soon so stay tuned for more.

Meanwhile, if you want to catch up with "tulip train" at future stops, be sure to look out for us at:

Hope to see you somewhere soon!

1And for some, to drink. Boozy publishing lunches may be rumoured extinct, but Frankfurt is the habitat in which the last few survive. The chaps seated next to me on my outbound flight were getting started on the red wine even though it was barely lunchtime. "Might as well start as I mean to go on," said one, sheepishly.
2Having just learned the word, this is my first conscious zeugma.

Happy New Year! Hope you all enjoyed some rest, and some fest, and have chosen your resolutions for the year ahead (ours is 1280 x 1024 ....