Broadening the visibility of your research: ideas from a workshop at the 2016 ARMA conference

Rightly or wrongly, publications are a critical part of researchers’ career development. It’s still the case in most disciplines and countries that a “good” publication will make your career. And it’s not long ago that, if you wanted to make sure people found read and applied your work, publishing it - whether in a relevant journal, or as a monograph or book - was enough. But in an age of information overload – and of growing metricisation - this is no longer the case. Publishers provide lots of important services but typically don’t have the capacity to undertake targeted marketing around each individual piece of work they publish. This means that much research is scarcely, if ever, downloaded or read, much less applied or cited. This in turn means that researchers need to take action themselves if they want to ensure their work finds its audience.

Around the time we started Kudos, we undertook a survey of around 4,000 researchers to determine, among other things, who they felt provided them with support for increasing the visibility of their work. When asked whether their institution provided them with such support, only about 50% of respondents gave a positive response. When we’ve explored this point in interviews with researchers and institutional staff since then, it’s clear that while institutional support does exist, it’s not always clear who provides it - making it hard for researchers to know where to turn, and indeed for institutional staff to be able to know about each others’ efforts, let along align and build on them.

This is the backdrop to a workshop that we led last week at the 2016 conference of ARMA (the Association of Research Manager and Administrators) (slides). Building on that last point, we started with an exercise where we explored the different teams / offices involved in increasing the visibility of research outputs, the range of names by which they are commonly known, and the intersections between them (which we didn’t explore in detail during the workshop but which I’ve attempted to represent in my diagram!). The number of sticky notes we ended up with - and the complexity of this diagram - is a pretty good indication of why researchers struggle to know where to turn for support. 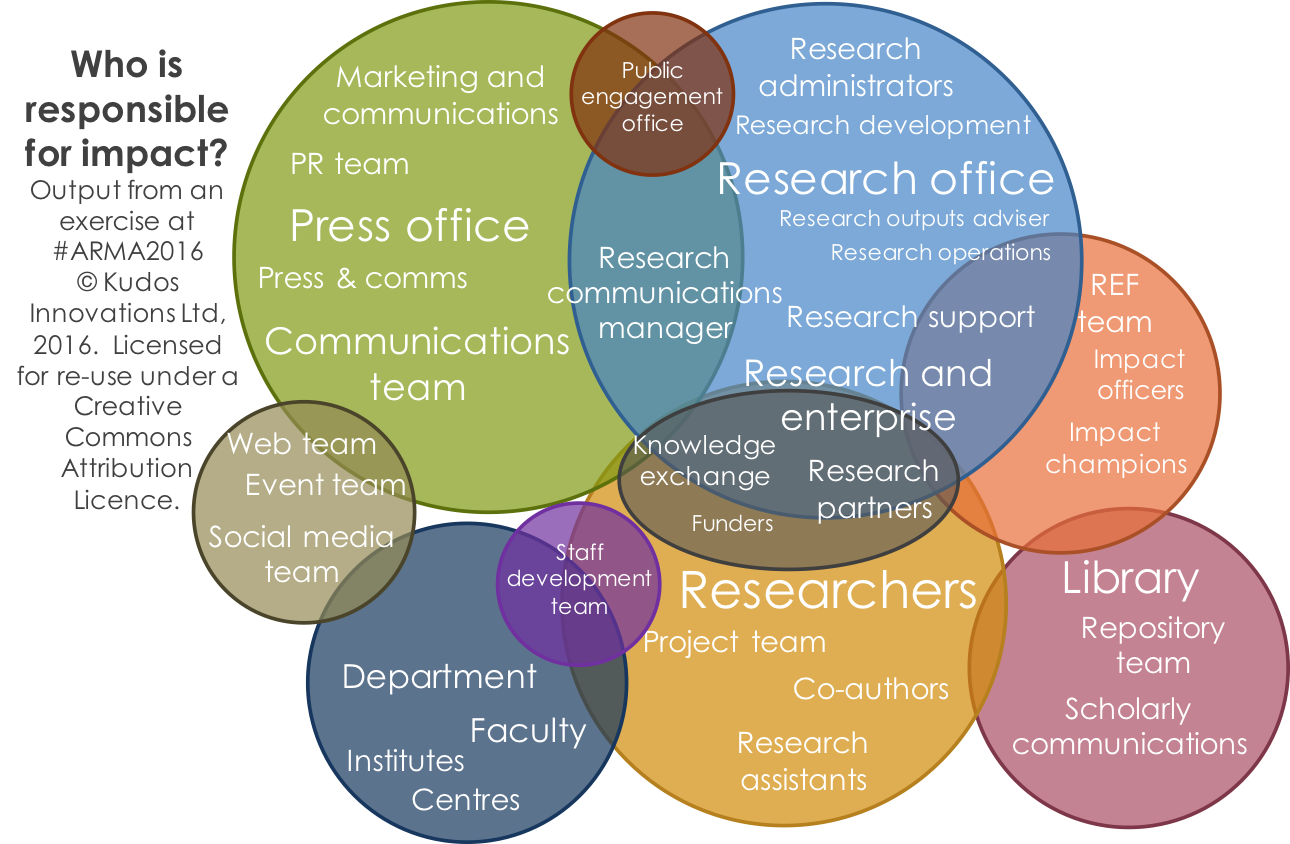 Open "who is responsible for impact?" as PDF

Following this initial foray into roles and responsibilities, we began to explore possible tools and techniques for how researchers and institutional staff might work together to increase visibility of research outputs. In order not to let our thinking be hampered too much by real-world experiences and constraints, we started this exercise in reverse: instead of asking ourselves (for example) “how can we maximize the audience for our research”, our breakout groups brainstormed how they would achieve the following three goals:

The crazy ideas that came out of those discussions have been blended in the following graphic which I share for comedy value but also because it is the "dark side" of the "bright side" featured at the end of the post:

Open "what not to do" as a PDF

The final part of the workshop involved “flipping” - picking some of the most thought-provoking ideas from those above and considering what the opposite might be, and then brainstorming a little more about practical ways to implement those ideas. We didn’t have time to “flip” all the ideas but I carried on playing the game on the way home so was able to complete the “flipped” table, below, which could be a nice graphic to use as the basis for further discussion with your colleagues - I’ve licensed it (and all these graphics) under CC-BY for that purpose. Here is a summary of the final ideas from the session:

Many thanks to all who participated in the workshop and to the excellent #ARMA2016 conference for the facilities.

Open "broadening the visibility of your research" as a PDF